PCC Secretary, Shrawley and the Witleys 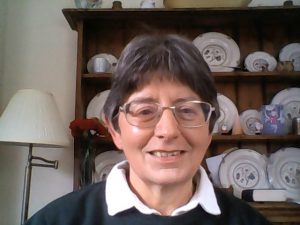 My name is Eleanor Baber. My involvement in what is now the 4Rivers Group of Churches began in 2001. I came up from Essex to marry Herbert who lived in Abberley (we were both widowed). He was the organist at Great Witley Church but also frequently played at most of the other churches for regular services, weddings and funerals. I went with him as principal support and page-turner and so got to know the members of the various congregations who without fail were welcoming and caring.

I had my own role too as a member of the bellringing band at Shrawley, and as Secretary of the Restoration Committee, as a steward and as a member of the choir at Great Witley Church. After Herbert died in 2012 I also became PCC Secretary and Parish Safeguarding Officer for Shrawley and Witley. The ringing, singing and the welcoming of visitors are a source of great joy but the administrative tasks are sometimes dry and dusty. However everything involves working with a team of lovely and supportive friends.

I think of my Christian faith and being a member of the Church of England as being part of my DNA. My father was a parish priest and my mother the archetypal “vicar’s wife”. As a child “Church” was all around me. I am not a natural rebel and although at times I may have drifted away and questioned some of what I was brought up to believe, I have found that when I have returned to the Christian community that this is the right place for me to be. There are still challenges and I am learning all the time but in the past few years I have become increasingly convinced that the love of God is with us in all things and gives us the strength to cope with the ups and downs of daily life. My favourite quotation from the Bible (using the King James version with
apologies to those who prefer a more modern translation) is from the end of St. Matthew’s Gospel when Jesus says “Lo, I am with you alway, even unto the end of the world.” That is real for me.

All children, young people and adults in our Parishes regardless of age, gender, ability or ethnic origin have a right to be protected from all forms of harm, abuse, neglect and exploitation.

We take our duty to protect everyone very seriously.  Click here if you need help or to find out more.

If you need help or information relating to the pandemic, including mental health, click here for pointers to useful resources.